YET ANOTHER MARS PROBE HOAX 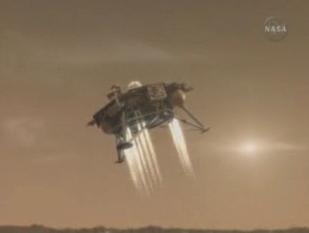 NASA has successfully landed a probe at Mars' north pole to drill for signs of water, which would likely indicate life, at least in the distant past. This is great news for space enthusiasts and science itself, considering that Mars Polar Lander crashed. If you believe that, I have a bridge to sell you. This is a hoax NASA is perpetuating to sell the idea that they aren't just one failure after another. They pull off one of these charades every time they are cash strapped, and need funding from Congress, as you may have read here before. For evidence of this fraud, we need look no further than the name of this probe: Phoenix. It is named after the city it sits just outside of. If you did not make this obvious connection, they are laughing at you. They are getting so arrogant about these cons, that they did not even bother with a more clever name.

I spoke to Ben Cooper, a special effects artist in Hollywood who specializes in exotic location sets and monster costumes. I asked him how hard it would be to stage a convincing fake Mars landing, and he said, "Easy, actually. We could even do it on a sound stage for the most part with only a small bit of b-roll from Arizona. A little foam rubber, some polystyrene rocks, an exacto knife to cut the rough edges off of the props we make and some paint are really all we need," said Cooper. "No one outside of my craft would know any better. We have had all the stuff we need to make this look real for decades, and it's not even that expensive any more."

Mars is red, and a desert. So is much of The Copper State. That makes it very simple for NASA to hire a few Hollywood types, and create a ruse like this. Here is my prediction: Findings will be inconclusive, but will warrant further study. Congress will buy that, and pony up more cash. You might want to consider writing your Congressman and Senators, and letting them know you don't approve of these NASA and Hollywood joint productions at taxpayer expense.